Why A Hockey Booster Club Matters To A Hockey Team

Why A Hockey Booster Club Matters To A Hockey Team

Hockey is an expensive sport to play. From skates and pads to sticks and helmets, hockey players have to manage more equipment than the average athlete. And along with the price of ice rink rentals for practice and scrimmages, the cost of running a school hockey program is significantly higher than other interscholastic sports like soccer and volleyball.  But coaches and players don’t have to do it alone. A great hockey booster club can give their team the support they need to succeed in this demanding sport.

Every year, it seems more and more athletic programs are being cut from budgets in US schools. And being an especially expensive sport to play, hockey teams are often in danger of losing their funding.

Hockey teams can’t rely on school funding alone to support their team. Nor should athletes have to depend on the financial status and generosity of their parents to obtain quality equipment. But young athletes still deserve a chance to play, regardless of financial circumstances.

Any student who wants to play the game should be able to. And with the support of a booster club, they can. So, let’s talk about why having a hockey booster club matters. 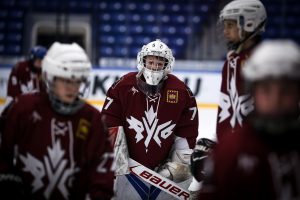 Sports program booster clubs are small nonprofit organizations operated by parents and community members. The main function of a booster club is to provide support to their school team. An athletic booster club helps to promote attendance and spirit at games, manage donations to the team, and involving parents and students in team activities. But primarily, a booster club supports its team in the form of fundraising.

A great sports booster club organizes a variety of fundraising events over the course of the year and then allocates those funds to purchase new equipment, cover transportation costs, and provide nutritious meals for players, among a variety of other benefits for the team.

The biggest problems many hockey programs face is lack of quality equipment. Players can’t be reasonably expected to outfit themselves in proper gear, and so the booster club raises funds in order for equipment c be purchased.

Many hockey booster clubs raise funds through selling ads, holding raffles and auctions, or even organizing big ticket fundraising events like an annual charity golf tournament. Folks in the community see their local sports teams as a cause worthy of their hard-earned money, but it’s up to booster clubs to facilitate donations. 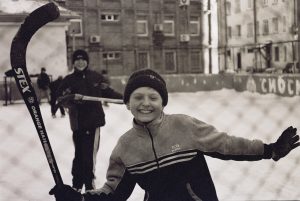 Sports are about community, and a hockey booster club can bring a community together to support their team. First and foremost, a booster club connects parents and local volunteers, creating a sense of comradery and purpose in the lives of those who run the booster club.

A booster club is also an invaluable asset in involving alumni to support the team. Former players in the area are often willing to show their support, whether through donations or attendance. Involving alumni shows current players that they are part of a legacy and demonstrates the powerful bonds of your team to the community.

Booster clubs are instrumental in connecting the community. By collaborating with local businesses, hockey booster clubs raise awareness of their team. Flyers and posters in the entrance of a neighborhood diner or pizza place builds team recognition and attracts new fans to attend hockey games.

Sponsorships from local businesses can be displayed on banners in gymnasiums, on uniforms, or in print and digital media created by the booster club. And by reaching out to local newspapers, radio stations, and news affiliates, booster clubs can help their team gain exposure and create excitement around upcoming games and team events. 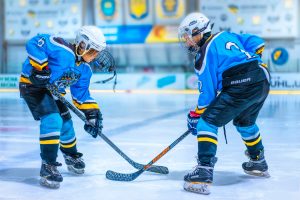 Booster Clubs Keep Players at the Top of Their Game

If you played hockey in high school, you know how hectic the schedule can be: wake up early for class, work hard for the whole school day, and then it’s straight to grueling practice. It can be exhausting for a growing teenager.

Consider transportation. Hockey teams need to get to their away games in the most reliable mode of transportation possible, but not every athletic program is well-funded enough to provide bussing to their athletes. Funds raised by booster clubs can be directed towards obtaining buses and shuttles to transport players rather than relying on the kindness of parents and athletic staff to drive them.

And don’t forget about nutrition. Players can’t always go home for a good meal before an important game, and so it’s up to the booster club to provide nutritious food to players to fuel their bodies when parents aren’t able to. 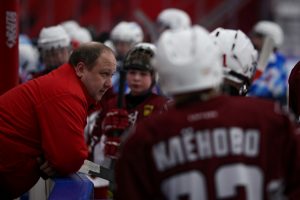 But perhaps the most overlooked function of a hockey booster club is building team spirit. When players know that they have dependable equipment, facilities, transportation, and all the other factors that constitute a successful sports program, they have the confidence to play at their best.

Hockey booster clubs are often responsible for organizing end of season banquets and other athlete-focused events. Acknowledging the achievements of the players fosters a gratitude and appreciation for the organization.

A booster club can also make their hockey team feel like they are part of something bigger. The booster club can rally the community behind the team, involving alumni, local businesses, students, and neighbors to fill the stands.

When a team has the support of their community, they play at their best.

Hockey is one of the most beloved interscholastic sports in the United States. Parents pass on the hockey tradition to their children, gleaming with pride knowing that their child plays on their old school team. But like so many interscholastic athletic programs, hockey teams are confronted with budgetary challenges and often have difficulty finding the support they need. With a well-organized, purpose-driven hockey booster club, young athletes can hit the ice with the confidence that their team can succeed.